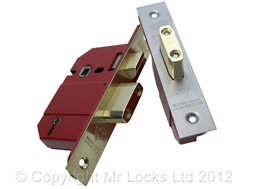 Your local Swansea locksmith can fit all types of BS 3621 5 lever mortice deadlocks to wooden doors, commercial doors and Industrial doors when customer's keys have been lost or stolen, or when a customer moves into a new home or business premises in Swansea.

5 lever BS 3621 5 lever mortice locks are also known as a BS 3621 deadlocks or some people refer to them as a BS 3621 chubb locks. These type of locks normally have a long back door type key and once locked cannot be opened from either side of the door without using the key. 5 lever BS 3621 locks are available as either a deadlock version where a deadbolt is operated by a key, or sashlock version which has a key operated deadbolt and a handle operated latch mechanism in the same lock case. 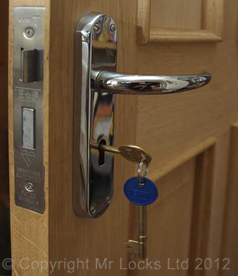 A BS 3621 5 lever dead lock will always be stamped with the British Standard 3621 Kitemark. Since its inception, BS 3621 has always required that a door is secure from both sides, meaning that, once locked; a key is always required to open the door, whether from the inside or the outside.

A BS 3621 Kitemarked 5 lever dead lock will have undergone vigorous testing to ensure it meets the required standard of security and protection; typically it will have the following characteristics:

Historically a BS 3621 Kitemarked lock would always have been a chubb type 5 lever mortise deadlock. However, in recent years several manufacturers have designed nightlatch type locks that can also be deadlocked from both sides of the door and have achieved the same security levels of a mortise deadlock, hence they also been tested and awarded the BS3621 Kitemark which is considered the benchmark by insurance companies.

For more information about about 5 lever mortice deadlocks call Mr Locks your local Swansea based Master Locksmiths free on 01792 399800. Mobile users can also call on 07976 961473.